I have had a few bosses who I remember fondly and only 3 that had such a profound effect on my life.   Thomas was one of them.  He was my boss for 3 years.  He was a CFP who is known as the father of the profession of coaching.   He lived a full life.  Born a few months before me, in July 1955, he died on February 11, 2003.  Ten years ago, but it seems like yesterday.  He still has lessons to teach us all.  What can you learn from his article?  Let us know by posting your comment below

I was recently asked this question by a coach and I thought it would be fun to think “back” and identify the key factors.

Well, it wasn’t really a vision at first; more like something I was really interested in – – training coaches and creating new/better ways to serve my clients. I had this idea  that it would be possible to train a coach in an hour. Sounds silly, but this goal/vision has influenced and motivated me because it’s so BIG and would require a radically different approach to coach training. It’s called a vision, because it’s clear to me that this will occur, and hopefully during my lifetime.

2. I created a game that others could also win at.

In helping to “package and popularize” the coaching profession, I opened the door for thousands of professionals to become coaches and earn a great living at it.  When you give folks access/faster access to money and happiness, they’ll return the favor in many ways: personal support, gratitude, referrals, cash  contribution/gifts, etc. Value has been added and folks pay you back when they receive value. Simple as that. The funny part of it has been that the financial cost  of me adding this value to others has not been very expensive. It was very expensive, personally/emotionally/spiritually, however.

3. I was entirely selfish in my efforts, yet….

I was looking out for me and doing things (writing, teaching, etc.) that gave me pleasure or energy or money. When in doubt, I put myself, my intuition, my needs, my opinion first. I made plenty of righteous mistakes, but I’ve come to believe in my approach. Dangerous perhaps, but tempered by an EQUAL dose of ‘standing in the shoes of my  customers/clients/students’ and feeling/guessing/asking what would serve them most TODAY. So, I was being really selfish, but getting my inspiration/direction/guidance from my customers. This selfish/contributory dynamic works really well for me.

4. I asked my critics to take a hike.

I could definitely would have made fewer mistakes if I was willing to listen to my critics. But the fact is, I am too SENSITIVE to hear much criticism, even if accurate. And, some people just think that it’s their role in life to point out other people’s weaknesses and boo-boo’s. I got really tired of that and decided to surround myself with folks who agreed with me AND who could point out errors with LOTS of sensitivity. I’m a believer that my sensitivity/reactiveness has permitted me to create cool stuff. I’ve given up the conventional wisdom that you should be really open to criticism from all sources. No thanks.

5. I had several key coaches and partners who were incredibly supportive.

As I was building Coach University and my other ventures, I had lots of emotional support. I needed it, given my history with depression and other stuff. These folks kept my spirits up, endorsed me and even the dumb ideas I’ve had, etc., because they had FAITH in what I was up to. Plus, they were personally and financially benefiting from my efforts, so they had a vested interest.

I live on less than $40,000 a year; Coach University is primarily volunteer-run. Both mattered a lot. It’s hard to make money in the training business and I knew I was going to make mistakes rearing this baby. Mistakes are/were financially expensive — but because Coach U was volunteer-based, I could afford to incur/pay for those “learning curve” mistakes and not put the company at great financial risk.

7. I knew that I was going to sell Coach University from the day that I started it.

Having this goal in mind gave me some of the emotional freedom I needed to keep working at it. Having sold Coach U in mid-1996, I look back on the experience and believe that the timing was perfect; it was strong/structured/viable enough to sell and the right person (Sandy Vilas) bought it.

8. I create by fully responding, not by trying to create.

Life is my creative catalyst. I am a far better “responder” to what’s going on right in front of/around me than I am at creating from scratch. The key is to surrender to responding vs. trying to initiate new stuff all of the time (too exhausting!). I feel/am sensitized to a lot of what’s going on around me, so I always have something to write about or create. My inspiration comes from others/life/situations; not from me.

9. I put myself on a progressive thinking track.

I am interested in how I think and in how the world is evolving. I read everything from Wired Magazine to The Economist; from USA Today to the Wall Street Journal; from The New Yorker to the New York Times. I read for the pleasure of it, but also know that reading such a list of magazines affects my thinking and educates my mind — not just with facts, but with IDEAS! I create by feeling/getting and I have CHOSEN to surround myself with ideas, trends, information and people/writers to affect me greatly. It’s SO much easier this way!

10. I continually add value, everywhere and for everyone.

If I have something that I can share with others, or if I can improve something that I’ve created, I do so. My goal with Coach U was to double the value that students got from the program each year, yet keep the tuition at $2495. I think it’s fair to say that this has worked and will keep working. I know of no other company that both thinks AND acts in this way. If I had to pick out the #1 source of my success, it would be this one: Adding value, everywhere and always, just for the pleasure of it.

About the Submitter: This piece was submitted by Thomas J. Leonard. His site is maintained at www.thomasleonard.com Copyright 97, 98, 99, 00, 2001 CoachVille

This content may be forwarded in full, with copyright, contact, and creation information intact, without specific permission, when used only in a not-for-profit context. 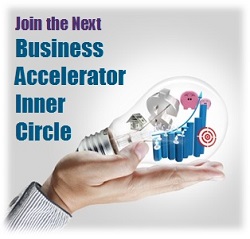 Enter your best email address and name to get free goodies and blog updates from me.

I'm reading this book again. It's the best book for new speakers or those of us who could use a refresher course. It's an instructional book.